Waitrose is the first UK supermarket to welcome new season British asparagus to its shelves – launching eight weeks ahead of the usual peak season.

The bumper crop of British asparagus is grown by Sandy Booth on his farm in the New Forest, where the increased light levels and warmer temperatures naturally found on the south coast allow for the crop to be harvested earlier than before.

The early British asparagus will be available in selected Waitrose shops from Wednesday 24th February, before being available nationwide by mid/end of March. 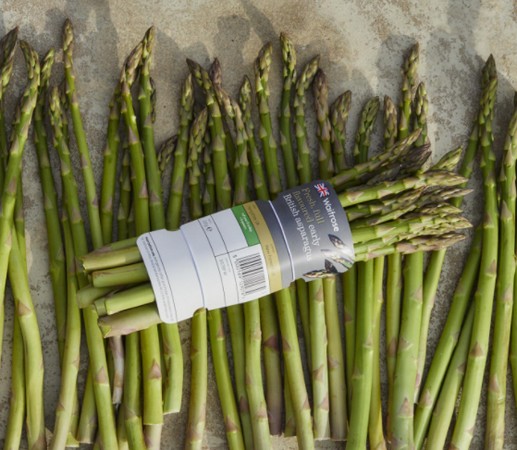 Lucy Broughton, Vegetable Buyer at Waitrose says, “We’re thrilled to be able to offer our customers home-grown British asparagus earlier than usual. For us, this marks the start of spring and we hope that customers will be excited by the fact that spring is finally on its way!”

Grown specially for Waitrose in the south coast of England, Gijnlim is a variety that is available earlier due to advanced growing techniques and south coast climate.

The asparagus are grown in raised beds covered by a combination of black and white fleece tunnels over each bed to increase the plants core temperature. The substrate is also covered on the sides with black ground cover and a very thin black membrane which protects the spears from the cold whilst also capturing and retaining the heat from the winter sunshine. The substrate warms up quicker than soil hence the earlier production and a layer of sand over the soil gives two benefits – the first maintains soil temperature and secondly allows the spears to emerge easier and clean of any soil.

Asparagus has continued to rise in popularity among customers, with annual searches for the spring vegetable up 667% on Waitrose.com. Popular recipes include Green baked eggs with new season asparagus, Asparagus, lemon & pecorino pasta, Classic pea & asparagus risotto with sage butter.