The asparagus seed harvest in New Zealand is started two weeks earlier than previous seasons. The harvest of asparagus seeds would normally run from mid-March through to the end of April. Dr Peter Falloon from Aspara Pacific is excited about the earlier harvest and explains, “We have had the perfect combination of warm dry weather since spring and excellent pollination, so we are predicting one of the best yields on record.”

The excellent conditions have come at a great time for Aspara Pacific who have begun full production of ground-breaking varieties that are virus free and Phytophthora tolerant. 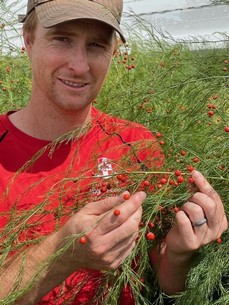 “We have long known that Asparagus Virus 2 is one of the main contributors, if not the primary cause of asparagus decline in New Zealand.

Asparagus decline had previously been associated with the soil borne fungus Fusarium but research at Michigan State University and Lincoln University, New Zealand has since shown that Fusarium is more of a problem when asparagus plants are already infected with the virus.

Since effective control of Fusarium has proven almost impossible we have attacked the problem from the other direction and chosen to eliminate asparagus virus 2 by breeding varieties that are free of the disease.”

One of the main sources of asparagus virus 2 has been in imported asparagus seed. So our goal has been to develop varieties for the New Zealand industry that are free of the virus.

One of these varieties Challenger 2 also has high levels of tolerance to the soil borne fungus Phytophthora. Phytophthora rot is a world-wide problem reducing yields by up to 50% in asparagus in Europe, Asia, North Central and South America and Australasia. The wetter the harvest, the greater the losses due to Phytophthora.

Aspara Pacific’s new variety Challenger 2, is one Dr. Falloon is especially proud of after breeding asparagus for over 40 years. “It has shown excellent tolerance of Phytophthora rot, it is less affected by Purple Spot (caused by Stemphylium) and is especially useful under organic conditions. Not only that, but International asparagus variety trials carried out over 8 harvest seasons have shown Challenger 2 to be the top yielding variety, out-yielding Eclipse, Sequoia, Millenium and Equinox.

Aspara Pacific has a number of other virus free varieties, each producing excellent results in different growing conditions around the world. They export seed to over 20 countries with Dr. Falloon “looking forward to exporting larger volumes of premium seed around the world. With such a fantastic harvest this season we are in a position to supply the bigger asparagus producers who are looking for high yielding, virus free asparagus seed.”