This season, Dutch asparagus growers have faced all kinds of market situations. « We started with normal prices; then the market peaked at Easter. After that, however, prices dropped dramatically and, for four weeks, everyone worked below cost price. Many growers stopped, but the market has now recovered, » says asparagus grower Walter Gubbels.

« The change in weather added to that, with growers harvesting far fewer kilos. And since many growers stopped, the supply was somewhat depleted. So, it seems that prices could peak again. AA-asparagus are currently being auctioned for between €10 and €11. Those are fantastic prices. But those won’t make up for the whole rest of the season. Hopefully, it can compensate for a small part. » 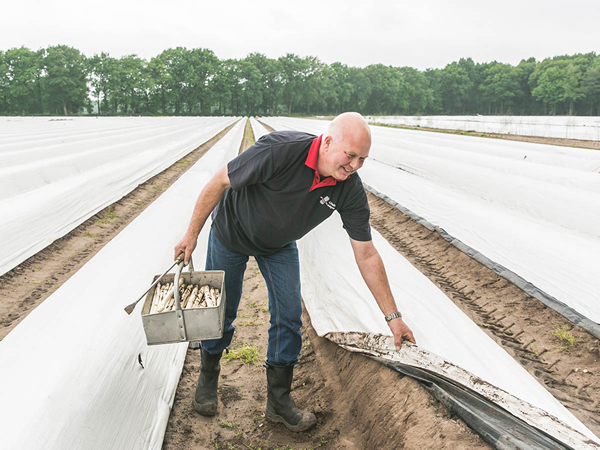 « I’m not surprised that we’re getting nice prices again. I’d expected this when the price level was still low. But then the question was, who’d hold out the longest. The costs have risen enormously, which genuinely made last month no fun, » says Walter, who cultivates green and purple asparagus too. « The green asparagus market was difficult at the start of the season because Spanish and Italian asparagus were still on the market. »

« They were of lower quality but were cheaper, which is what people choose. Those asparagus are now off the market, and Dutch green asparagus prices are recovering. Purple asparagus will always be a niche market. We sell them in our store and a little through trade, but I’m abandoning the idea that purple asparagus will become trendy in the Netherlands, » Gubbels explains.

« Peeled asparagus sales increased last year. That seems to be the case this year too. However, I think, in the supermarkets, peeled asparagus were priced too differently from regular asparagus. I don’t think that was necessary. I believe retailers wanted to make too much profit off the peeled asparagus. »

Walter considers the Cerescon’s – the developer of the first selective asparagus harvester robot – bankruptcy unfortunate. « I’m very sure such a robot will come onto the market at some point. But it costs a huge amount of money and can only be used for two months. That deters growers from investing. And the bad four weeks we’ve had on the asparagus market don’t do that willingness to invest any good either, » Walter concludes.