The French asparagus campaign ends on a sad note

This year, the asparagus season has been very complicated in general for French asparagus growers. The reason is the notable lack of consumption, despite a production being 10 to 30% lower than in 2021. “It is important to note that there was no excess of production this year, but the lack of consumption has led to a drop in prices, which has put some producers in a very complicated situation,” explains Christian Befve, founder and manager of the consulting company Befve &Co, and internationally renowned asparagus expert. 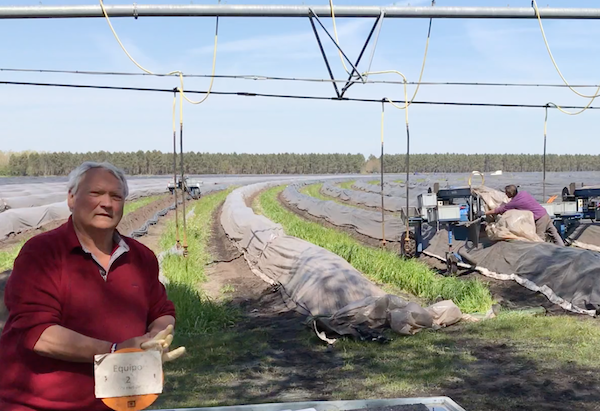 Nouvelle-Aquitaine region severely affected by the situation
Among the 4 main production basins which are the Nouvelle-Aquitaine, Southeast, Anjou and Alsace, the regions that export outside of the regional borders have suffered the most from this lack of demand. In Alsace, there are a lot of small producers and the concept of direct sales is well established, so the region was less affected by the situation. “The Nouvelle-Aquitaine region, and especially the Landes – largest producer of asparagus – were particularly affected. The Landes basin has few inhabitants so it exports large volumes to other regions of France.”

The presence of foreign origins has caused prices to drop
The producers whose asparagus end up on national interest markets such as Rungis or Perpignan, have seen the price of their production drop for the past three weeks because of the strong presence of other origins like Germany, the Netherlands, Belgium and even Spain. The situation is worsened by the fact that some countries like the Netherlands prefer to sell at a loss on other markets rather than to weaken their own. At the end of last week, a bunch of green asparagus was sold at 1.5 euros [1.6 USD] and the white asparagus at 2 euros [2.13 USD] on the Rungis market.

Economic crisis narrowly missed
The situation could have improved if some supermarkets had played their part. “We wanted to trigger the crisis but we did not succeed. When the average price at the national level is 15% lower than the 5-year average (Olympic average over the last 5 years), the ‘asparagus information threshold’ is triggered. The government then informs supermarkets that the French asparagus sector is in trouble and encourages them to support the French origin. If the average national price reaches -25%, then we pass the ‘abnormally low price’ threshold, which sets off the economic crisis. Once the crisis is triggered, supermarkets are forced to reduce their margins on the specific products and to favor the French origin within three days from the start of the crisis. Right after Easter, we reached -20% at the national level, and -25% in some regions. Unfortunately, this was not enough to trigger the crisis, which was very detrimental for the sector. We will work hard to have the crisis level lowered to -20% from next year.”

Low demand also for the organic sector
The situation is also very complicated for the organic asparagus, which is affected by the lack of consumption as well. Some producers have had to sell their organic asparagus as conventional. This situation has led to a significant loss in terms of revenue, and it has also contributed to the congestion of the conventional market.

Early harvests: an asset in this 2022 campaign
The lack of consumption has forced some producing regions to stop their production two weeks earlier. The southwest and southeast of France are in the process of ending their harvest and the Anjou area should be done by the end of month. Generally speaking, the producers who harvested early in the campaign are the ones who managed the situation the best. But for most producers, the pivotal period around Easter when consumption is at its highest went rather well.

A lack of consumption that has affected most European countries
This lack of consumption has affected the entire European basin. “If the situation is not great in France, it is even more complicated in other countries. Consumption has been very low in Germany and in the Netherlands and their productions arrived late on the market, so they were not able to benefit from the high prices of the beginning of the campaign. France put an end to its campaign early but still managed to last for 1.5-2 months. The German campaign ended after only 3 weeks. Some producers will not recover and the surface areas will most likely drop next year. In Spain, 40% of the harvest was lost because of the drought and the intense cold. Even with rather decent prices, producers will not be able to compensate for the losses caused by the lack of production.”

Despite the very complicated year for many asparagus growers, Christian Befve remains optimistic. “Crises are necessary to move forward. Next year, the production from other countries might drop, which will be favorable for the French sector. And if people consume more and supermarkets play their part, we will have a much better campaign.”