Only a small proportion comes from domestic cultivation

Some 740 grams of green asparagus were eaten per capita in Switzerland in 2020. The figure for white asparagus was slightly lower, at 530 grams per capita. Although the domestic share of asparagus has been rising slightly since 2000, it still accounts for a small proportion of these volumes.

It should be noted, however, that the share produced in Switzerland is only registered in the statistics from a “market-relevant” quantity. These are mainly the asparagus for the wholesale trade. The Swiss Central Office for Vegetables and Special Crops (SZG) assumes that domestic production is somewhat higher, since the direct market volumes are not accounted for. 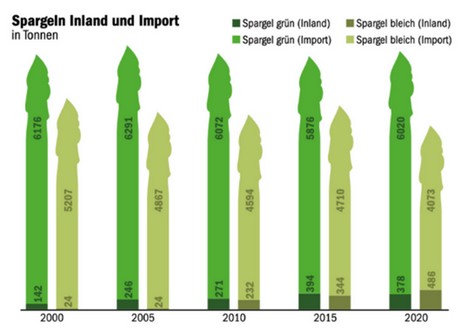 Since asparagus is often sold in farm stores, the share for direct marketing would be somewhat higher than for other vegetables, where it is estimated at 10-15%.